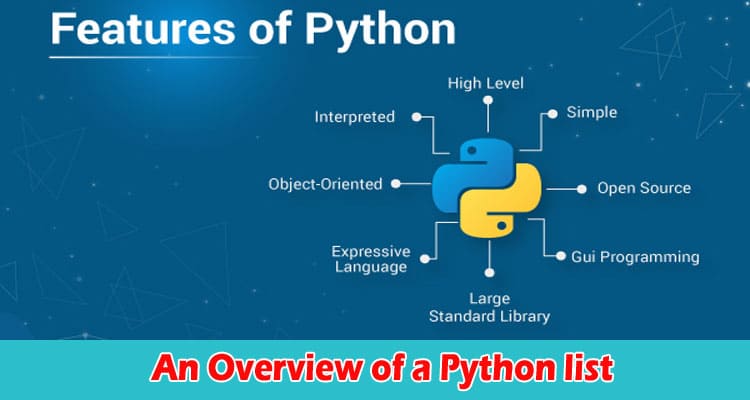 When you learn about Python, have you ever gotten into trouble with the Python list? If yes, don’t worry. Let’s follow this article. We will help you understand more about the Python list. First, we need to know what a Python list is.

A list is an ordered series of elements that may be altered or modified in Python. A list’s items are any values or elements contained within it. Values inside square brackets [ ] define the lists, similar to characters inside quotations define the strings.

When you wish to work with multiple relevant values, lists are fantastic. You may condense your code, run the same methods and operations on multiple values, and keep data that belongs together.

When thinking about Python lists and other data structures, such as varieties of collections, including your assortment of files, song playlists, emails, browser bookmarks, or the collection of videos you can access on a streaming service, …, it is useful to consider all the collections you have on your computer.

You can place items inside [], separate by commas to create in Python as below:

Python has the option of building a list inside another list. Simply described, it is a nested list containing one or more lists as elements inside. Look at the following example to understand more:

Here is a list of lists. Independent lists [a,b], [c,d], and [e,f] is supplied as elements to create a new list.

After learning about the definition of a Python list, let’s move to the next part about creating a list of lists in Python.

How to create a list of lists in Python?

There are many ways to create a list of lists in Python, such as using the append() function, the list initializer in Python, the list comprehension, and the for-loop. Now let’s go into each way in detail.

To fully see how this function operates, we will generate two lists, which we will then join into a single list using the append() function.

We may construct a more detailed list of lists by explicitly combining the for loop with the append() function. In this way, nested loops will be used.

That concludes our look at the Python list. We hope you enjoy this article. If you have any problems, please comment below. We will answer as possible. Besides that, let’s learn and share knowledge about IT on LearnshareIT. Good luck to you!